This is a guest post by Joan DiMicco, who heads the IBM Visual Communication Lab. Matt McKeon, Karrie Karahalios, and Joan hosted a workshop on Telling Stories with Data. These are the highlights.

What is a story? In a classic sense, a story has characters, events, and a progression. In our postmodern, meta-obsessed culture, we also tend to think about story in terms of the identities of the author and audience.

At VisWeek 2010 in Salt Lake City, Matt McKeon, Karrie Karahalios, and I organized a workshop to explore this topic of Telling Stories with Data. We were initially motivated by our observation that people often use visualization to share personal perspectives and to tell stories about social situations.

For example, in May of this year, Matt was interested in exploring how Facebook’s default privacy settings have changed over time. To that end, he created a visualization to illustrate their evolution. Matt then posted the visualization to his website, along with some explanatory text that further communicated his point of view. At the time, Facebook’s privacy policy changes were a trending news topic, and the visualization spread rapidly through Twitter, Facebook, and several news blogs. Through use of animation and appropriate metaphor, this visualization told a simple yet compelling story: the information you put on Facebook is visible to larger and larger groups of people. 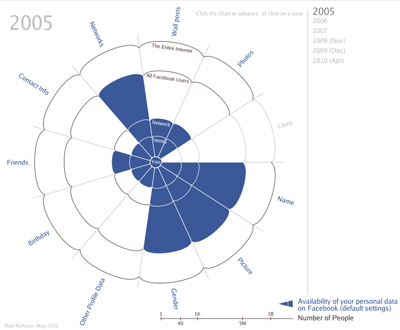 Yet the things that we found most striking about reaction to this visualization went beyond the issues we tend to think about as visualization designers. Matt found that changing a single sentence in the framing text of the visualization radically altered the nature of the comments that people made. Furthermore, as the story spread, people retold it as their own story, using the data visualization to describe elements from their personal experiences with Facebook.

This suggests factors that transcend the boundaries of “Visualization Design 101” and that affect the creation, interpretation, and popularization of data-centric narratives. We organized this workshop in order to explore these topics, bringing together some great speakers and participants to hash out an agenda for research and practice around storytelling with data. Luckily, this turned out to be a theme at VisWeek 2010: Jock Mackinlay and Fernanda Viégas organized a panel around the same topic, and Ed Segel and Jeff Heer’s excellent design space survey of narrative visualization provides a much-needed stake in the ground for further research.

We see the theme of “storytelling with data” as a re-focusing of the discussion of “visualization for the masses” that emphasizes the communicative intent of visualization, rather than simple mass appeal. A visualization can be viewed in terms of its intended message, the characters and events within the data, and the intended progression the audience can take through the visualization. Additionally, an effective story can be understood by different audiences with varying levels of expertise with the material.

We organized our workshop around four themes: Storytelling Practice, Interactive Journalism, Storytelling Theory, and Tools for Storytellers. Below is a summary of the eight presentations, along with some of our thoughts. More details can be found on the workshop website, along with PDFs of each speaker’s presentation.

We invited two data storytellers to share their ideas, questions and observations with us.

Jérôme Cukier runs the OECD factblog, a venue for popularizing the economic and development data that his organization gathers. His goal in creating a given blog post is to capture the interest of the reader within 10 seconds; visualization is an important technique for doing so. Once he has the reader’s attention, the text of the blog post describes the data in more detail, including links to download the data. Like a journalist, his approach is to start with the story he believes is in the data, rather than performing analysis to find stories. Once he has a story in mind, he deliberately limits the data he visualizes to create a simple, coherent story. The story’s purpose is to provide a concrete message that is expressed in few data points. 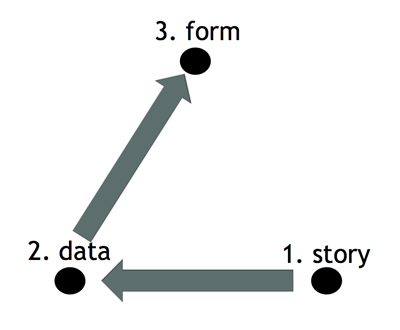 Matthias Shapiro is an independent visualization designer and developer; those of you who have read Beautiful Visualization may remember his chapter on storytelling. He began his talk by describing classic story structures, such as the heroic epic; he uses these models to structure the pace at which he introduces visual data into his narrative. He then shared two videos to illustrate different modes of audience engagement: the Obama Administration’s Road to Recovery video frames unemployment statistics as a near-mythic struggle between a disaster and a hero, while Matthias’ own Obama Budget Cuts Visualization uses the down-to-earth metaphor of pennies to explain Obama’s proposed budget cuts in 2009. These stories both assume a basic understanding on the part of the reader, and each slowly introduces more data, represented by visuals, as the story builds. He recommends data storytellers place the data into a context and scale that the user already understands. Finally, a narrative twist or surprise at the end tends to make for a persuasive story. 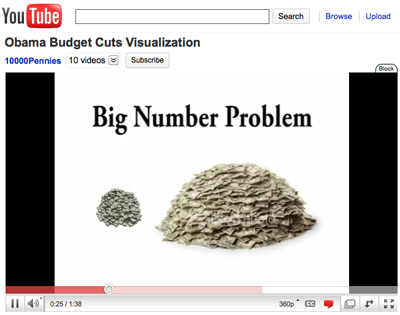 Interactive data visualization is changing the way journalists present stories, and The New York Times is often cited as an example of its power. CNN is enabling readers to use data to tell personal stories within the framework of interactive visualization.

Manav Tanneeru and Toni Pashley from CNN.com presented several examples of their visualization work, including the powerful Home and Away interactive feature. Produced in collaboration with Stamen Design, Home and Away presents military casualties in Iraq and Afganistan by connecting the locations of each trooper’s birth and death, along with some search and dynamic query features based on demographics. The visualization is deeply integrated with CNN’s iReport platform, allowing family and friends of the deceased to tell their personal stories in the broader narrative of the conflicts. Toni placed special emphasis on the need to rapidly engage an audience with data of this scale, and shared some of their techniques and metrics for success. Manav described some of the features of the visualization (such as deep linking to specific visual states) that enabled them to treat Home and Away as a platform for telling multiple stories in several articles while still empowering their audience to explore on their own. 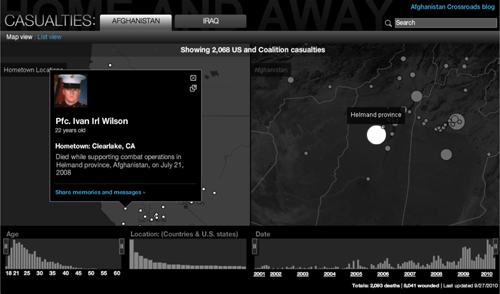 Nicholas Diakopoulos of Rutgers University presented a different model of interactivity in journalism by exploring the concept of “Game-y InfoGraphics.” His projects, both in and out of the newsroom, use traditional game mechanics to engage users with data; Nick argues that this process of interaction helps people to discover stories they may not have found otherwise. One example of this is Salubrious Nation, a guessing game that encourages people to explore outside of their own demographic and geographic regions while playing the game. 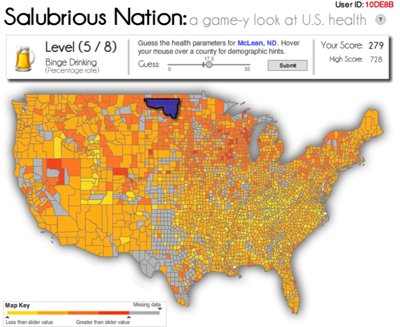 One can draw an interesting contrast between the approaches of our three speakers in this session. They each have the goal of encouraging users to explore the data, yet Manav and Toni emphasized interaction techniques (such as splashes, explicit search tasks, and featured iReport content) to immediately engage the casual reader by helping them to find personally relevant data. On the other hand, Nick’s visualizations use game mechanics to encourage readers’ interest in people and places that are unfamiliar to them.

One of our goals for the workshop was to learn what humanities scholarship might have to say about the creation of data narratives. In this session, we invited two speakers to lead a discussion of the theoretical aspects of storytelling: what kinds of stories exist, what the component elements of a story are, and how those might be embodied in a visualization.

Jessica Hullman, of the University of Michigan, used the example of the NYTimes’ How Different Groups Spend their Day to illustrate elements of narrative theory and their application to critical scholarship of data stories. A multilayered approach that identifies the agents, events, and progression in a story enables us to deconstruct their presentation in a given visualization and thus understand the design choices made. Similarly, a model of perspective can help us to isolate the narrative voice of a visualization and tease out the motivations, relationships, and social contexts that enable that visualization to tell a story effectively. These two approaches can help us to analyze existing visualizations that tell stories, and therefore develop theories that can inform the creation of more effective and engaging visual narrative devices. Jessica’s future work focuses on analyzing perspective in data visualization, and the manner in which it drives interpretation of data. 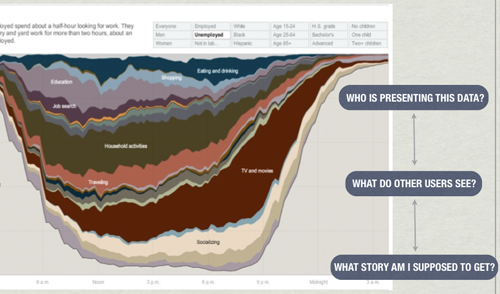 Next, Aisling Kelliher from Arizona State University gave us an overview of computational storytelling, beginning with the fundamental concepts of Aristotelian poetics (perhaps a first for an IEEE conference) and exploring how a given medium influences the styles and experiences of stories. She then went on to share some of her own work in rich media storytelling, from
systems that enable people to assemble stories from their photos to visualizations that track broader trends across social media. In doing so, she constructed a map of telling stories in interactive media – ranging from individual to societal and human-authored to emergent.

Aisling’s talk sparked a discussion of characters and scale in data stories — many statistical graphics contain data that spans a broad population. The challenge of telling a story with such a dataset is identifying individuals in the visualization in such a way that their stories form part of the broader epic. 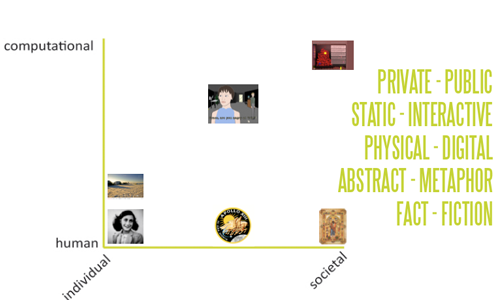 There are several tools available for everyday users to create visualizations, and these tools are becoming increasingly sophisticated in their support for conveying and sharing complex stories. We asked Jock MacKinlay of Tableau Software to illustrate features in Tableau Public that support storytelling. Jock shared an example from his personal experience: a comparison of two math textbooks that used multiple data visualizations coupled with a textual narrative. Jock created this feature in order to persuade his local community to select a different textbook for their school system. Jock pointed out that a highly customizable visualization appearance is critical for systems that support storytelling, because an author may use a number of layout, animation, and visual features to control the flow of a narrative. 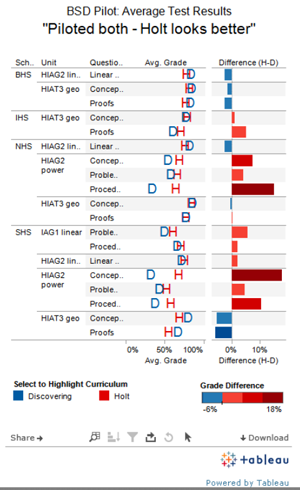 Wesley Willett from UC Berkeley presented his tool CommentSpace as another example of how visualization tools can support users in creating stories. CommentSpace builds upon the capabilities of previous platforms like sense.us and Many Eyes by supporting more structured commenting, allowing hypothesis construction and evidence gathering. Through CommentSpace, a user can explore a fully-featured visualization and construct an argument for or against a hypothesis by tagging comments and different views of the data. Wesley’s recommendation for tools for storytellers is to support three stages of story development: exploration of the data, organization of the points, and synthesis of the story. 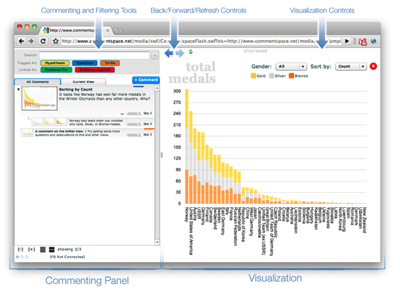 All in all, storytelling offers a compelling lens for both critiquing existing visualization systems and designing new ones. A number of issues were identified by both speakers and participants in this workshop as important to consider when using this perspective, including:

We’re excited to explore these and other issues with the visualization community, and think that a focus on storytelling with data has the potential to promote increasingly sophisticated and data-literate conversations in the world at large.

My many thanks to Joan, Matt, and Karrie. Visit the workshop page for more details on telling stories with data and the presenters’ slides.