Faith and poverty in the world 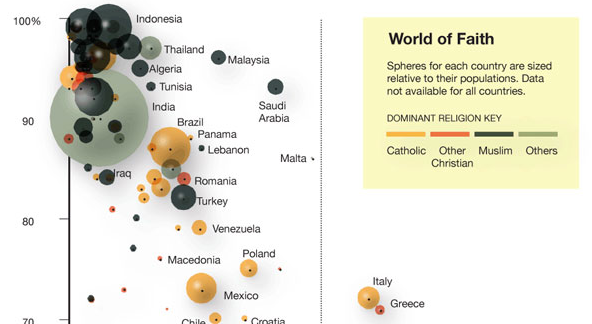 Using data from a recent Gallup report showing a correlation between wealth and faith, Charles M. Blow reports in graphic form. Each sphere, sized by population, represents a country. Spheres are colored by dominant religion in that country.

The United States is an outlier among the relatively richer countries. While the United States is the richest country by GDP per capita, 67% of Americans say that religion is important in their daily lives. Compare that to France, Britain, and Japan who report 30% or less.

On the flip side of that, it looks like there’s a cluster of countries with both low GDP and low religiosity, such as Vietnam and Russia.

Many scientists believe “religion plays a more functional role in the world’s poorest countries, helping many residents cope with a daily struggle to provide for themselves and their families.”

Does this suggest that outliers might use other ways to cope with struggle?