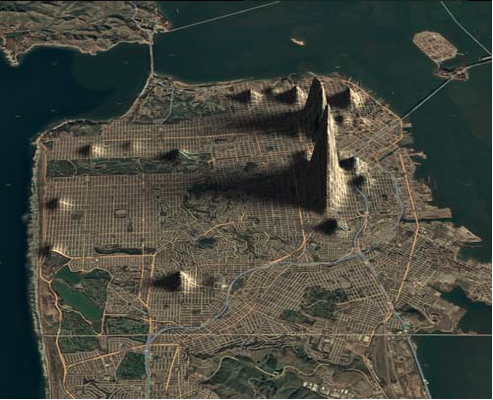 Doug McCune maps San Francisco crime in 2009 as if it were elevation. Peaks and valleys emerge with the rolling terrains of crime. The above is the map for prostitution:

My favorite map is the one for prostitution (maybe “favorite” is the wrong choice of words there). Nearly all the arrests for prostitution in San Francisco occur along what I’m calling the “Mission Mountain Ridge”, which runs up Mission St between 24th and 16th. I love the way the mountain range casts a shadow over much of the city. There’s also a second peak in the Tenderloin (which I’m dubbing Mt. Loin).

I love how realistic the 3-dimensional models look. They could almost pass for clay figures. Doug notes that the series of maps are more an art piece than they are information visualization, but these would be a great complement to your standard choropleth.