Data.gov.uk versus Data.gov – Which wins?

Back in May last year, the US government launched Data.gov as a statement of transparency, and the Internet rejoiced. After the launch, excitement kind of fizzled with the actual Data.gov site, but big cities like San Francisco, New York, and Toronto got in on the open data party.

Then just a couple of weeks ago, Data.gov.uk launched, which brought me back to the US counterpart. How do the two compare? Here’s my take. 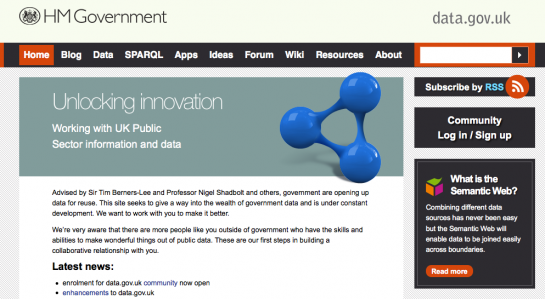 The two applications are very similar on the surface. They catalog government data. Look a little closer though, and you’ll see that they’re actually really different in purpose, design, and end results. These key differences stem directly from those who were involved in the creation of each.

Data.gov: According to FAQ, it was developed by the Federal CIO Council, as in Chief Information Officers Council. Here’s their main role in government, which sounds a lot like information science:

The CIO Council serves as the principal interagency forum for improving practices in the design, modernization, use, sharing, and performance of Federal Government agency information resources.

Data.gov.uk: It was a much more tech-oriented operation from the UK side with Tim Berners-Lee and Nigel Shadbolt advising. Shadbolt is a professor of artificial intelligence at the University of Southampton and Berners-Lee is credited with inventing the World Wide Web.

Winner: Toss up. While the computer science backgrounds can lead to good implementation, the information science crew took on organizing the many many US agencies. However the UK had the Web inventor. Yeah, gotta give the edge to the UK.

Now let’s get into the actual data. When Data.gov first launched there were only forty something datasets, but the collection has since grown to several hundred. Data.gov.uk, on the other hand, started with a few hundred.

Data.gov: It links directly to data files in various formats including CSV, XML, Excel, and KML. A lot seems to be lacking though. For example, there’s no basic demographic data like population from the Census Bureau. You think that’s where they’d start. Maybe the Open Government Directive, which instructs Executive departments to publish three “high-value” data sets, might help this along.

Data.gov.uk: Instead of hosting the data, the UK took a link catalog approach. To the end user this doesn’t make a huge difference. As long as you get the data, you’re good, but from a developer standpoint, it’s a lot easier to catalog links than files.

Winner: Data.gov.uk. A quick browse through the available data sets on both sites will show you the wider range of topics on Data.gov.uk.

Data.gov: At launch, Data.gov didn’t look all that bad to me, but then I tried to use the site and find some data. The main flaw I saw was in the data browser. I wasn’t looking for a particular data set. I just wanted to browse, so I’d select an agency and search. The problem is that a lot of the listed agencies don’t have any data cataloged.

Data.gov.uk: Navigation through the site was very familiar using common netspeak like tags and apps. I felt more engaged.

Winner: Data.gov.uk. Both could use a data preview though.

Data.gov: Other than the “join the dialogue” section on a separate domain and the pitch on the homepage, Data.gov makes little effort to highlight or promote any projects that use the data from the site. The focus is on a repository. What you do with the data doesn’t seem to matter much. At least Sunlight Labs is making an effort.

Data.gov.uk: Lists recent apps and has an idea submission section. They clearly want you to use the data with a developer-centric approach. 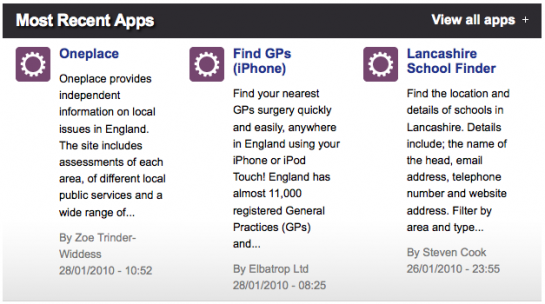 Winner: Data.gov.uk. It’s all about engaging with data over creating a catalog.

While Data.gov.uk was just recently launched publicly, it has many advantages over Data.gov. It’s easier to use and geared towards developers, who, let’s face it, are the only ones who are going to do more with the data than open it up in Excel. Data.gov has some catching up to do. Both still have a long way to go. Both are good steps in the right direction.