A Visual History of Loudness in Popular Music 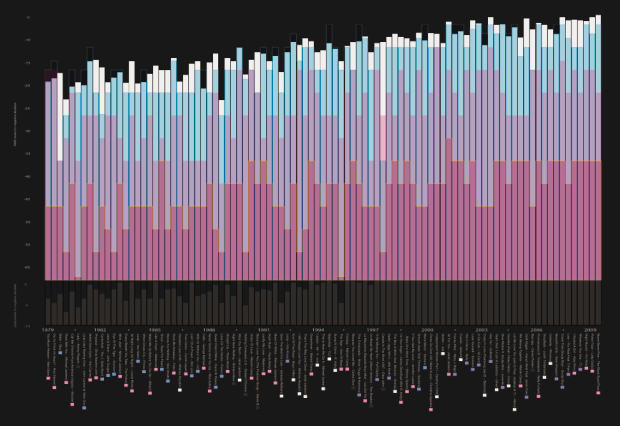 All Things Considered discusses why music sounds worse than it did a few decades ago. Through a practice using compressors, the quiet parts of a song are made louder and the louder parts quieter so that the song as a whole sounds louder to your ear. The purpose: to make the song stand out when you hear it on the radio.

As a result, tracks have gotten louder over the years.

A Trend Towards Loud

Christopher Clark explores the trend of loudness with this graphic [pdf]. He selected several songs from each year and summed the maximum RMS levels. Songs are color-code by genre.

What you see is an upward trend towards louder, and what some might argue, suckier music.

Had it not been for Robert Siegel’s chat with Bob Ludwig, a record mastering engineer, about this trend, I’d be more skeptical about what I’m seeing. But Ludwig’s explanations follow the visual, so just disregard the nonsensical pie charts on the bottom and the statistical bias that I am sure stemmed from hand-picking the songs.

Oh how I long for the the music of the 80s, when music was pure and beautiful and so much easier on the ears.