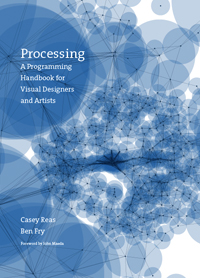 Processing 1.0 was released yesterday and it “only took 162 attempts.” I strongly encourage you to check it out – especially if you’ve never heard of it. Even if you’re not into programming, there are a lot of fun-to-look-at demos. Processing is an open source programming language that aims to make it easy to animate and draw programmatically with students, artists, designers, and researchers in mind.

Here’s the first part of the press release:

Today, on November 24, 2008, we launch the 1.0 version of the Processing software. Processing is a programming language, development environment, and online community that since 2001 has promoted software literacy within the visual arts. Initially created to serve as a software sketchbook and to teach fundamentals of computer programming within a visual context, Processing quickly developed into a tool for creating finished professional work as well.

Processing is a free, open source alternative to proprietary software tools with expensive licenses, making it accessible to schools and individual students. Its open source status encourages the community participation and collaboration that is vital to Processing’s growth. Contributors share programs, contribute code, answer questions in the discussion forum, and build libraries to extend the possibilities of the software. The Processing community has written over seventy libraries to facilitate computer vision, data visualization, music, networking, and electronics.