Today, Kevin Merritt, founder and CEO of blist, provides some background on putting data in the hands of mainstream users.

blist is not a company of modest ambitions. We want to democratize working with data much as PowerPoint and Visio have empowered mainstream users to create their own presentations and diagrams. Before these breakthroughs in innovation, mainstream users sketched free hand and asked professionals in central resource pools (art departments and engineering departments) to turn drawings into foil transparencies and blueprints.

Today, business analysts and data driven professionals rely on programmers and database administrators (DBAs) to create schemas. At blist, we aim to break this dependence. We believe strongly that a mainstream user should be able to design modest one, two and three table schemas without the help of a DBA.

At blist we’re innovating in unique ways to create breakthroughs in usability in order that mainstream users can design their own data models. In part, we’ve created an incredibly effective and powerful visual data modeling and query interface. But one innovation that results in democratizing working with data is an unusual and slightly controversial business decision we made. We decided that the data models of everyone using the free version of blist would be fully discoverable by everyone. What does that mean? It means that any database you create can effectively become the template for someone else’s database.

We recognized that for mainstream users, one of the hardest things to do when creating a data model is simply getting started. It’s the blank page problem. Initially we at blist thought we would develop starter templates to jump start people. But who’s to say we’re domain experts in any particular area and we don’t have an abundance of spare time to create templates for every domain in which people have interest. We recognized that if we made everyone’s data models discoverable by everyone else and if we developed an implicit ranking system for those data models, the community itself would produce a wide variety of schemas and the best ones would rise to the top naturally.

The discovery module in blist, depicted here, allows anyone to search the entire blist community for someone else’s data model to use effectively as a template. 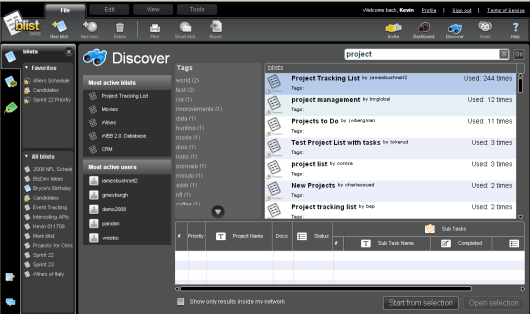 When someone searches for data models via the discovery tool, they can see the name, tags and frequency of use for any other blist (we call a database a blist). At the bottom of the tool the column names and types can be seen. It can be used as a preview or thumbnail. To use the highlighted blist as a template, simply click the button labeled [Start from selection]. A new blist created from someone else’s blist is entirely bifurcated from the original and can be used entirely as is or radically altered without any impact on the source blist.

It’s important to understand that we at blist have separated the permissions of the data structures from the permissions on the underlying data. By using the free version of blist, users agree to share their structures with the entire blist community. But they retain full control over how the underlying data is shared – fully public, entirely private or somewhere in between. At first some people expressed concern with our decision to emancipate data models, but an unusual thing happened. When we described the benefits to the community, every one – 100% – of people agreed this was the right thing to do. Not one person dissented! Later this summer or fall we’ll introduce a premium version of blist, primarily designed for businesses, in which users can elect to conceal a data model. These businesses may have a proprietary business process which provides strategic advantage and they really need to conceal the underlying data structure. Even then, the default will be to make the data model public and discoverable.

Data wants to be free. At blist we make it easy for data to be free, but more importantly we set data structures free. Looking to solve a problem but aren’t quite sure what the data structure should look like? Discover how others in the blist community have solved it and use their data model as a starting point to jump start your own efforts. The power of the community and some innovation provided by blist are helping to democratize working with data.