With more Many Eyes fun, Aron Pilhofer put in part 2 of his original post. I was pleased to see the first post get 56 comments, but I think part 2 might have gotten lost due to the high post frequency, with the U.S. Open fully on. Still worth a look though. 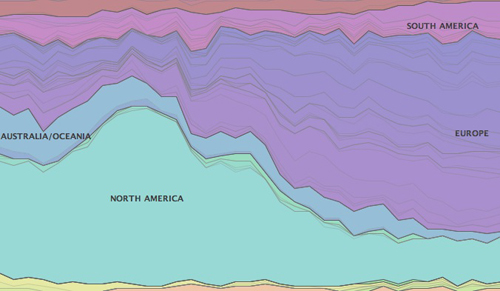 Aron goes a little deeper, looking at the number of competitors from other countries from 1972 through this year. We again see a similar story that we saw in the first post — a decrease in U.S. competitors and an increase from the rest of the world. I’m still kind of wondering what happened. Did the rest of the world decide that tennis is a fun sport to play at some point? Did prize money increase? Did Americans grow less interested? I don’t know. Something happened in the early ’80s, but we don’t have enough context to make a definite conclusion.

I suppose the next step would be to take a look at how the ATP rankings have changed over time. With rankings, we’d not only see the U.S. Open story, but more an international story. A (very) cursory inspection showed something similar to the U.S. Open story. In 1973, there were 20+ Americans in the top 100. As of today, there are only 9.