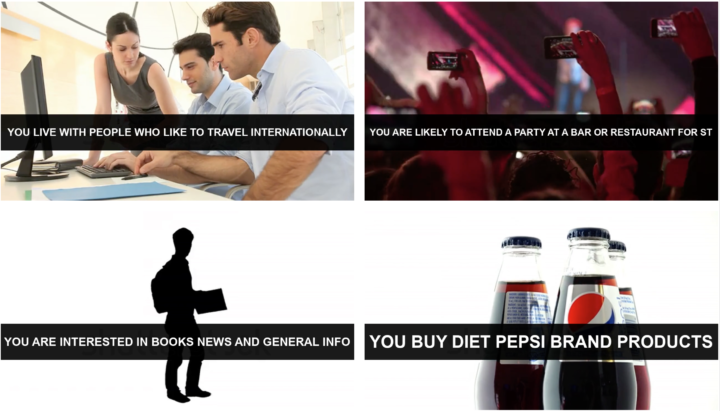 As you probably know, Twitter (and all social media) collects data about you and infers your likes, dislikes, wants, dreams, hopes, etc. Sam Lavigne set up a scraper to find out all the user segments, ranging from “buyers of cheese” to “households with people who have recently moved into a new home.” It can get pretty detailed. Lavigne then used this data to automatically generate an infinite ad campaign, on what else, Twitter.

Using this list I wrote a program, “The Infinite Campaign”, that automatically generates and posts an infinite series of video ad campaigns. The script randomly selects two behavior categories and one interest category from the ad creation page. It rephrases the descriptions of the categories, putting the statements in the second person. The Infinite Campaign then overlays those statements on top of automatically selected stock footage. Finally, it logs me in to Twitter, uploads the video, and auto-generates a new ad campaign, targeting the same behavior and interest categories used to generate the video.

The data is available for download, which includes the size of user segment and the data brokers involved.

By the way, you can opt out of some of the tracking in the privacy section of your Twitter settings. Obviously that doesn’t stop others from tracking you, but at least it’s something.