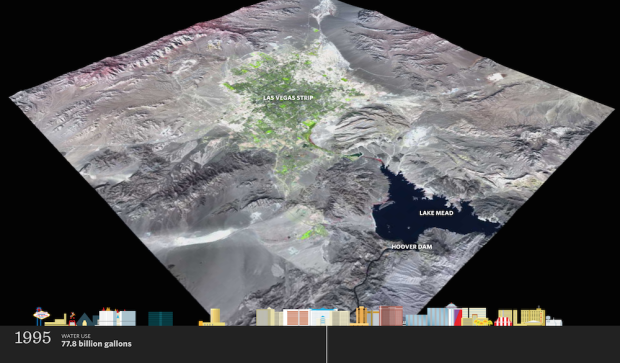 Western cities are growing but water supplies are decreasing. That’s not good. ProPublica, as part of their series Killing the Colorado, focuses on the fastest growing Western city: Las Vegas.

In 1971, the Las Vegas metro area was home to 262,000 people. Today, the population is approaching 2 million. Since 1990, its footprint has more than doubled. Managing urban growth is critical to the future of the West’s previous — and declining — water supplies.

The interaction is slick. Drag the cursor back and forth in the timeline on the bottom to quickly scroll through time. The green shading shows the quickly increasing Las Vegas city limits. The illustrated skyline changes too, which is a nice touch that places the data in a more relatable context.

They probably could have stopped there, and the piece would’ve been good, but you can also change the map perspective with a click and drag.