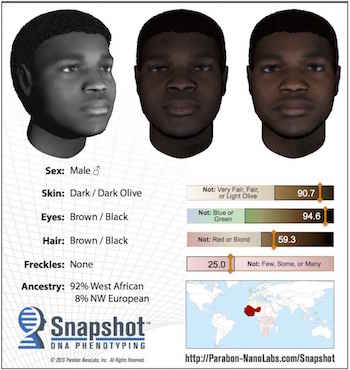 But, before anyone gets too excited, keep in mind that the estimates are still really rough.

Greytak agrees Snapshot is not super-precise, nor is the science ready for it to be. “Our goal is not to produce a profile that is perfectly accurate and there is only one person you’ve ever seen who could match that profile,” she says. “Really our goal is to produce something that will look similar enough to a person that it will jog a memory and, at the same time, make it clear which people it is not.”

There was an art project a few years ago that was something like this. The artist used DNA in gum and hair that she found in public spaces, and I could’ve sworn I shared it. Anyone know what I’m talking about? Update: It was Stranger Visions. (Thanks, Thomas.)