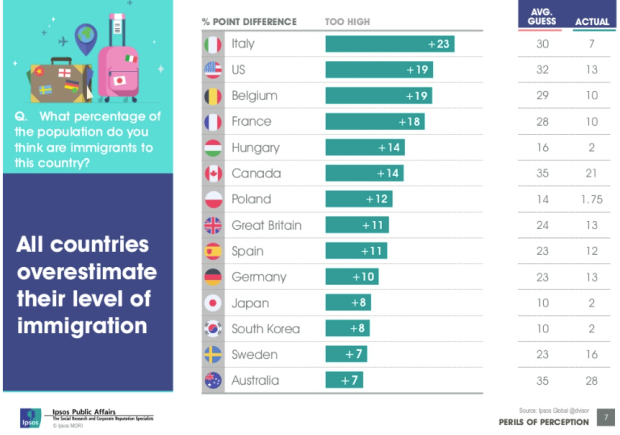 Ipsos MORI, primarily a marketing research group I think, released results of their study on public perception of demographics versus reality, on numbers such as immigration, religion, and life expectancy. The key takeaway is that out of the people they polled from fourteen countries, the average person typically over- or underestimated — by a lot.

This grows to be an issue as officials form policies driven by public perception, which is a similar takeaway from the Gapminder Foundation’s Ignorance Project.

The Ipsos MORI study also provides an index of ignorance, placing Italy at the top and the United States at number two. (Interestingly, Sweden, where the Gapminder Foundation is based, is last on the list i.e. lowest ignorance.)

Before you go nuts, remember not to take these ranking estimates too literally. Even though 500 to 1,000 people were surveyed for each country, I’d be curious to hear more about the sampling methodology. Was each country’s sample really representative of the population?

I mean, based on the chart above, the average guess for immigration percentage in the United States is 32. So people thought a third of the country’s population is from somewhere else? That seems high to me. Or maybe I’m just ignorant about ignorance. [via The Guardian]