A majority of your email in Gmail, even if you don’t use it 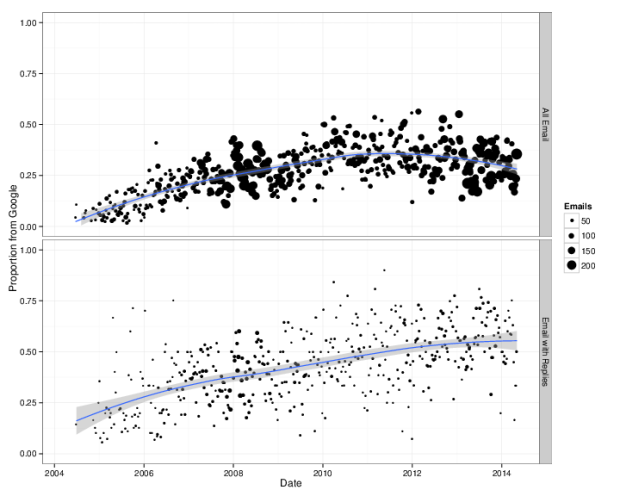 For reasons of autonomy, control, and privacy, Benjamin Mako Hill runs his own email server. After a closer look though, he realized that much of the email he sends ends up in Gmail anyway.

Despite the fact that I spend hundreds of dollars a year and hours of work to host my own email server, Google has about half of my personal email! Last year, Google delivered 57% of the emails in my inbox that I replied to. They have delivered more than a third of all the email I’ve replied to every year since 2006 and more than half since 2010. On the upside, there is some indication that the proportion is going down. So far this year, only 51% of the emails I’ve replied to arrived from Google.

Factor in the other services such as Yahoo, Hotmail, etc, I imagine that majority percentage goes up quite a bit. If you want to look at your own inbox Gmail count, Hill posted the scripts for your perusal.

This tutorial on downloading email metadata might be helpful too, if you’re looking for a more general script.