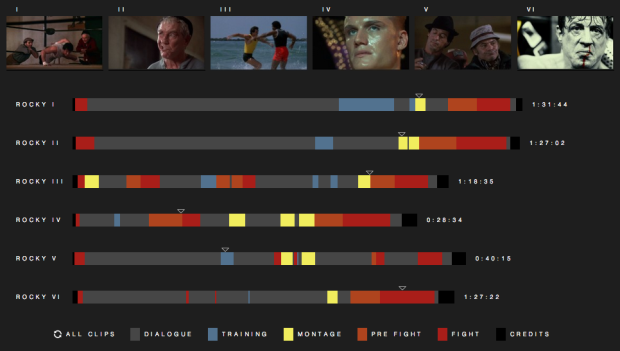 It’s interesting to see the battle between dialogue, montage and fighting throughout each film. Dialogue beats out training and fighting in the first two Rocky films, but fighting and montage occupy the most time in Rocky III and Rocky IV. Rocky V favors dialogue over fighting — undisputedly slowing its pace next to the previous films. In the final round, Rocky sticks with dialogue over fighting but — “it ain’t over ’till it’s over” — Rocky delivers one last montage and fight scene to close out the series and complete the Rocky Morphology.

Needs more montage. Maybe we’ll get it in Grudge Match, because as we all know, that has instant classic written all over it.