Where non-English language is spoken in the US 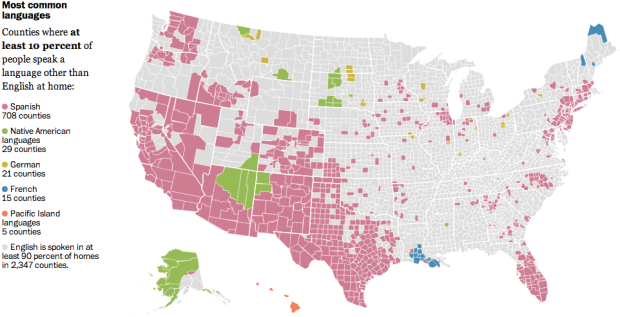 Dan Keating and Darla Cameron for the Washington Post mapped commonly used languages in the US household.

More than a quarter of counties in the United States have at least one in 10 households where English is not the language spoken at home. Spanish is, by far, the most common language other than English spoken in the home, especially on the West Coast, in the Southwest, the Eastern urban corridor and other big cities. Native American languages are also common in the West, as is French around New Orleans and in some counties in the Northeast. German is a common language in some Midwestern and Western areas.

Be sure to pay attention to the legend in this one. I bet a lot of people read this map as the most commonly spoken languages by county and thought Spanish is about to become the national language.