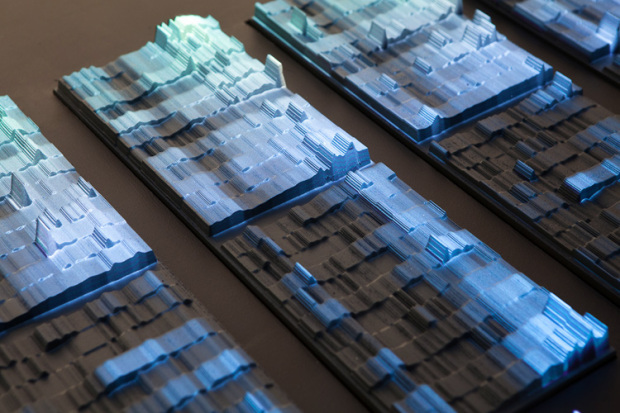 During the Olympics, Studio NAND, Moritz Stefaner, and Drew Hemment tracked Twitter sentiment with Emoto. This interactive installation and data sculpture is the last leg of the project.

The emoto data sculp­ture repres­ents message volumes, aggreg­ated per hour and senti­ment level in hori­zontal bands which move up and down according to the current number of Tweets at each time. This resulted in simpli­fied 3-dimensional surfaces which allows visitors to identify patterns in message frequency distri­bu­tion more easily. And while not being specific­ally designed in this direc­tion, the surfaces also nicely support haptic exploration.

The sculpture itself is black and unchanging, and it’s used as a projection surface to display a heat map and overlay text. The projection is controlled by the user, which makes for an interesting blend of physical and digital.