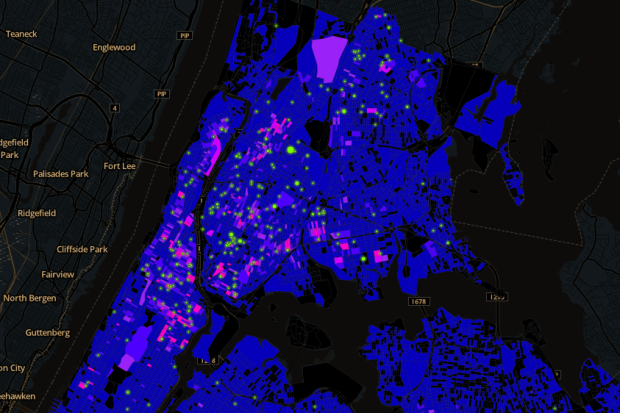 WNYC mapped all street stops that resulted in the recovery of a gun, based on data from the New York police department. On top of that, the green spots, they mapped areas where police search more frequently.

Mayor Michael Bloomberg and Police Commissioner Raymond Kelly argue the main purpose of stop-and-frisk is to get guns off the street. Out of more than 685,000 stops in 2011, about 770 guns were recovered. That means about one tenth of one percent of all stops result in the seizure of a gun.

But those guns are not showing up in the places where the police are devoting the most stop-and-frisk resources.

I’m sure a lot of people’s initial reaction to this map went something like this: “Psh. The police don’t have a clue what they’re doing,” which was one possibility the article suggested. The other was that the stops are working as a deterrent.

What’s more likely: Police officers have managed to end up in almost every area where there are fewer guns (and missed where there are more guns), or people with guns avoid the areas where there are a lot officers? I’m gonna go with the police point of view on this one.