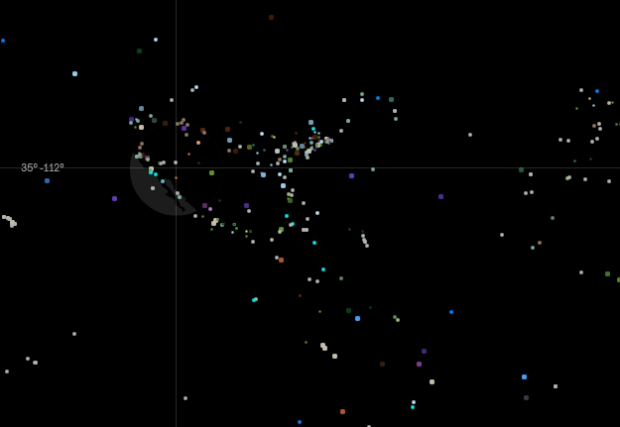 What is Missing? by Maya Lin seeks to raise awareness about the mass extinction of species. It has a beautiful interface. The world map is black on a sea of black. Your mouse acts as a sort of flashlight layered between land and water, showing you glimpses of familiar coastlines and allowing you to select dots that tell the stories of extinction.

We are experiencing the sixth mass extinction in the planet’s history, and the only one to be caused not by a catastrophic event, but by the actions of a single species – mankind. On average, every 20 minutes a distinct living species of plant or animal disappears. At this rate, by some estimates, as much as 30 percent of the world’s animals and plants could be on a path to extinction in 100 years.

The site states that the dots on the world map each represent a species, place, or natural phenomenon that has disappeared or significantly diminished. Unfortunately, this is a very vague concept. I chose a dot titled “Earth” that described the abundance of life in a cup of soil. Another dot named “Migration” discussed how the natural phenomenon of migration was disappearing around the world. It seemed so loosely related to extinction that I felt the mission of the piece fell short. You can also view the dots by year, however, I felt it only added to my confusion because it doesn’t seem to chronicle actual extinctions.

I typically love Maya Lin’s work, so this site was surprisingly disappointing and certainly not her best piece of data visualization (see Vietnam Veterans Memorial).