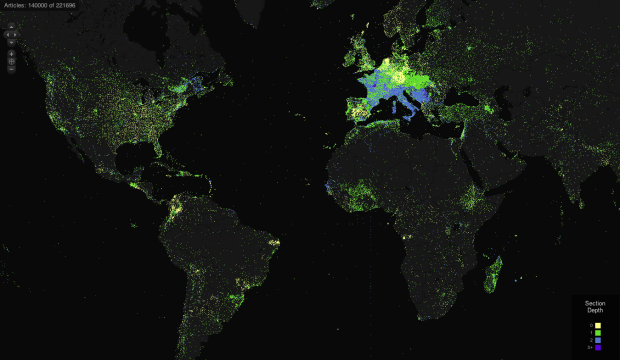 TraceMedia, in collaboration with the Oxford Internet Institute, maps language use across Wikipedia in an interactive, fittingly named Mapping Wikipedia.

Simply select a language, a region, and the metric that you want to map, such as word count, number of authors, or the languages themselves, and you’ve got a view into “local knowledge production and representation” on the encyclopedia. Each dot represents an article with a link to the Wikipedia article. For the number of dots on the map, a maximum of 800,000, it works surprisingly without a hitch, other than the time it initially takes to load articles.

This is part of a larger body of work from Mark Graham and Bernie Hogan, et. al, which focuses mostly on the gaps, specifically in the Middle East and North Africa.

There are obvious gaps in access to the Internet, particularly the participation gap between those who have their say, and those whose voices are pushed to the sidelines. Despite the rapid increase in Internet access, there are indications that people in the Middle East and North Africa (MENA) region remain largely absent from websites and services that represent the region to the larger world.