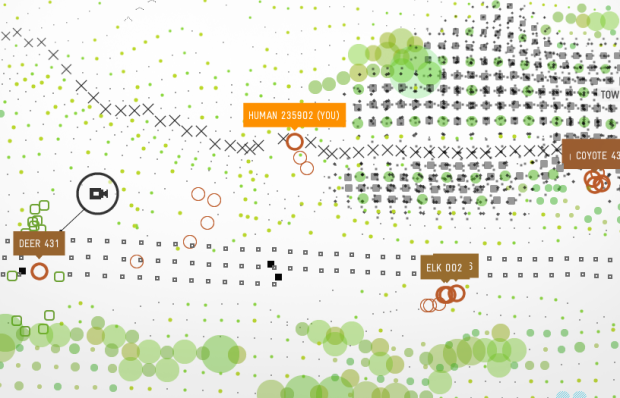 In a blend of data and storytelling, Jeremy Mendes and Leanne Allison dig into surveillance logs generated by a monitored grizzly bear between 2001 and 2009. The final work is a moving interactive documentary, Bear 71.

She lived her life under near-constant surveillance and was continually stressed by interactions with the human world. She was tracked and logged as data, reflecting the way we have come to see the world around us through Tron and Matrix-like filters, qualifying and quantifying everything, rather than experiencing and interacting.

Leanne Allison sifted through thousands of photos from motion-triggered trail cameras for this project. The grainy images gathered over the past 10 years by various scientists reveal the hidden life of the forest, played out by the animals and humans — including Bear 71 — captured covertly on film.

It begins with the capture of a grizzly, its tagging, and then release, as a first-person narrative tells a story through the eyes of the bear. You, the observer, are allowed to follow the bear and explore its environment on an abstract map, and somewhere along the way digital and the physical world melt together.