Mapping the drug wars in Mexico 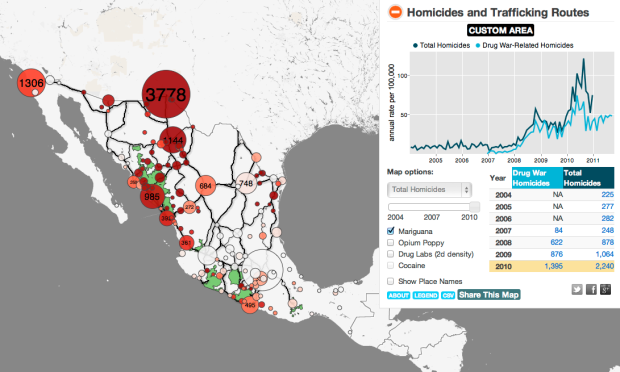 To unclutter the map and following the lead of the paper Trafficking Networks and the Mexican Drug War by Melissa Dell, I decided to only show the optimal highways (according to my own data and Google Directions) to reach the US border ports from the municipalities with the highest drug plant eradication between 1994 and 2003 and the highest 2d density estimate of drug labs based on newspaper reports of seizures. The map is a work in progress and is still missing the cocaine routes, but hopefully I’ll be able to add them shortly.

There’s lots to look at and interact with here. To start, there are bubbles that cluster homicides by region and major highway routes in black.

Take a look at the full map for yourself. This is nice work by Valle-Jones.