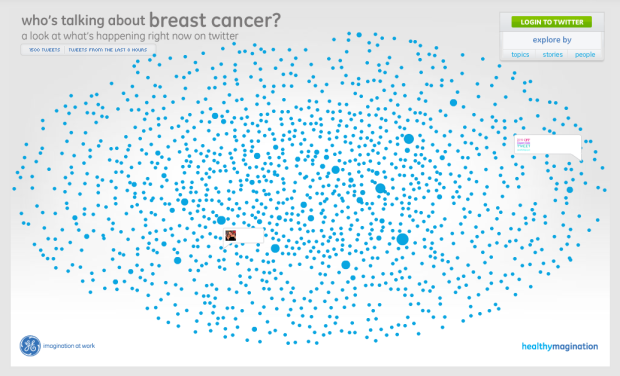 With Breast Cancer Awareness Month coming up in October, data visualization firm Periscopic teamed up with GE to explore the conversations about breast cancer on Twitter. Yes, believe it or not, people actually talk about other things besides Justin Bieber with the service.

The interactive starts with an oval shape that resembles a solar system (above). It’s the most recent 1,500 tweets that use “breast cancer” in the text. Each blue circle is a tweet, and they are sized by number of retweets. Roll over for a quick look at the specifics.

You can then get into subcategories of tweets that use “breast cancer” along with other terms such as awareness, support, and pink. You get something like below, which is the view for awareness. The colors and groupings provide a way to look another level down for tweets that use a term such as “October.” For example, a tweet that said “October is breast cancer awareness month” would be green. 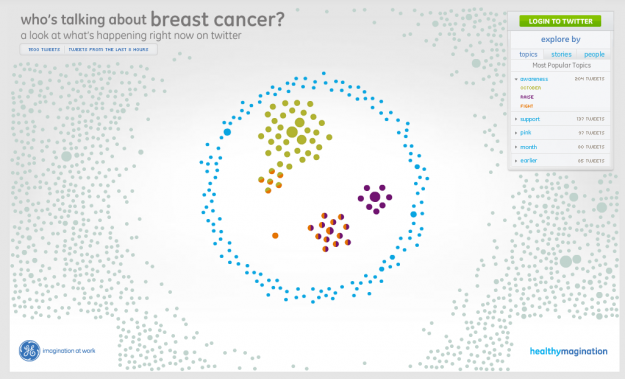 There are a couple of other similar views that let you see what related stories people are talking about as well as most active tweeters.

Overall the piece is an engaging one that lets you look at more if you want, reminiscent of We Feel Fine by Harris and Kamvar or the more recent Sexperience.