Geo API from Infochimps brings you closer to mapping fun 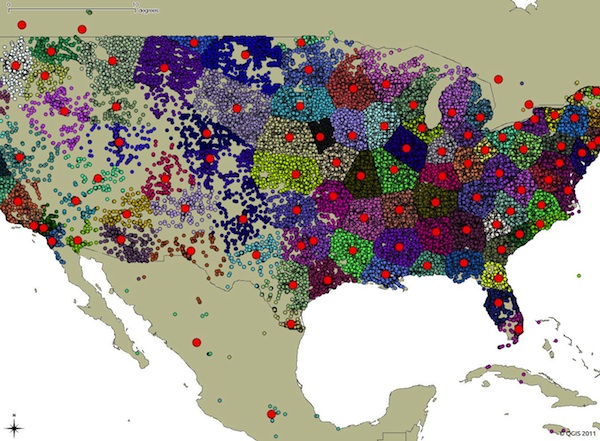 Mostly because of the popularity of smartphones, location data is all the rage nowadays. You’re almost always connected no matter where you are. Rich location data can help provide you a new sense of place, and at the same time, this sort of data can paint an interesting picture of what’s going on in your country or around the world. Hence, Infochimps, the one-stop shop for data folk and developers, just announced their new Geo API.

The API lets you easily access location data from a variety of sources, such as Geonames, the American Community Survey, and Wikipedia, all through a single API, meaning you don’t have to fuss around with multiple APIs run by a bunch of different groups with their own rules and syntax.

In addition to letting you query for records, the API also makes it easier to query across regions. For example, when you’re looking at a map and you have thousands of locations across a country, or even just hundreds within a small location, the map is pretty useless. You’ve probably seen these sort of maps, piled high with pushpins and running slow as mollasses.

The good maps out there aggregate and process the data as you zoom out and in. The good thing is that the Infochimps API will handle that for you.

Above is a map that clusters over 100,000 schools in the United States. Try to build an interactive map that shows all 100,000 points, and you’ll get an unusable application.

Bottom line: the API should make it a lot easier to get the data how you want it, which let’s you get to the fun part sooner.