Who owns the beer 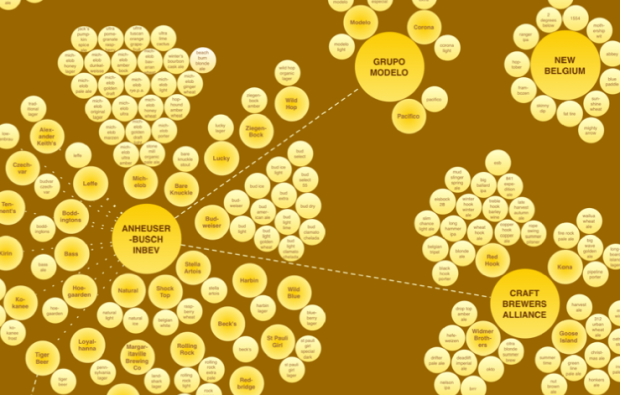 When you walk the beer aisle at the grocery store, there are lots of different brands and types, so it can be easy to think that all of those beverages come from different companies. Maybe you felt like supporting the little guy by buying that beer that looks like it came from a smaller brewery; however, you just might be buying from one of the big guys. In a follow-up to the soda structure map, Phil Howard and Ginger Ogilvie map the structure of the top 13 beer companies.

AB InBev owns, co-owns or distributes more than 36 brands, for example, while MillerCoors controls at least 24 more. MillerCoors also brews Metropoulos & Company’s products under contract (thus the company that controls Pabst and 21 other brands is a “virtual” beer company).

Stella Artois, Beck’s, and St. Pauli Girl: owned by AB InBev. Or how about Dos Equis, New Castle, and Amstel? Those are owned by Heineken, which is partially owned by Tiger Beer, which in turn distributed by AB InBev. Yep.

Check out the high-resolution version and other breakdowns here. Any surprises?

[Who Owns Brew | Thanks, Phil]