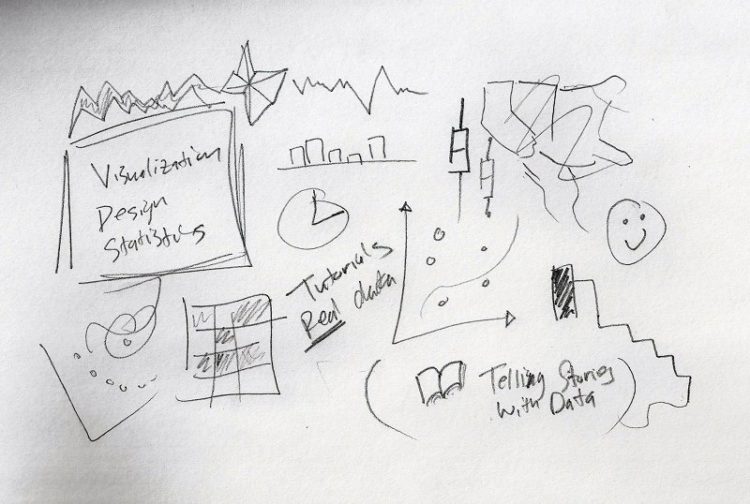 When I first got the opportunity to write a book, I was excited about it, and then I had to figure out what I was going to write about. Data visualization, obviously, but what about it? I was all over the place, and my early ideas are actually nothing like what Visualize This is now.

The first thought that came to mind was simply an extension of this blog. I’d feature others’ great work like I do here every day, but go deeper into the graphics.

A handful of books with similar themes had come out around this time, but they were focused only on design. Design is super important, and I cover it in Visualize This, but these books gave little consideration to the data that these amazingly designed graphics were based on, so I felt I had something to add. To me, the nerd statistician, data takes center stage, and everything else feeds off of it.

I tossed some ideas around, and fleshed out what such a book might look like. It didn’t work. It seemed like FlowingData rehashed for paper, which could be useful in some way, but I wanted to do better than that and provide something of greater value.

My second thought was a big book of my own graphics, namely displaying publicly available data that has never seen the light of day because no one has bothered to dig or people just don’t care about the subject (because no one has bothered to dig). I was fresh off a couple of experiments with FlowingPrints, and again, there were a few books along the same lines, but I wanted it to be more serious — yet show that data can be amazingly interesting when you look at in the right way.

However, a book like that would quickly show its age as the data got older. Newspapers, magazines, and the Web are much better vehicles for that sort of thing. So I saved all of my poo jokes for the digital world. The physical world just isn’t ready.

In the meantime, I continued to play with data and post anything that I thought didn’t really suck. And whenever I posted some of my own randoms, people would always ask what tool I used and how I did it. I tried to answer as many emails as I could.

It finally dawned on me that there should be a book on how to actually create and design data graphics. Like, really how.

Design tips, dos and don’ts, and a tutorial here and there won’t get you very far, especially if you’re stuck with a tool that isn’t right for the job or you have no idea that there are other options available. Programming skills can also help you a lot in getting the data graphics that you want, but a lot of people stay away, because, well, it’s a foreign language to them. Maybe you know the feeling. I know that feeling for sure, and I’ve found the easiest way to learn is to jump head first and make stuff.

So that’s what I wrote about. Lots of examples with real data, different tools, and thoughts on design along the way. My hope is that you’ll be able to build a foundation with Visualize This, and most importantly, apply what you learn to your own data — and of course, have fun doing it.