A century of deaths and a lot of fake blood 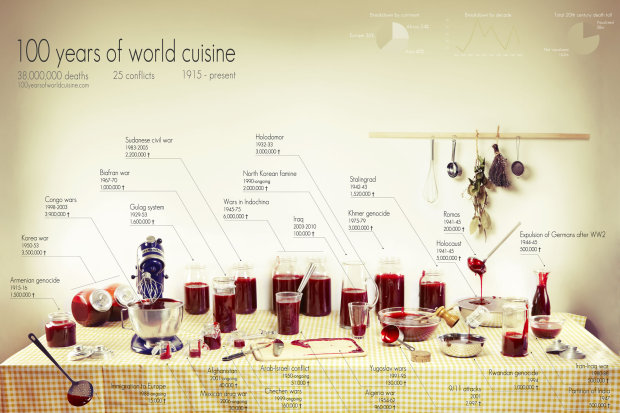 Rather than bars, bubbles, and dots, Clara Kayser-Bril, Nicolas Kayser-Bril, and Marion Kotlarski use jars, bottles, and bowls of fake blood to show deaths from 25 major conflicts in 100 years of world cuisine.

Ten casualties. Ten million casualties. Our understanding of conflicts is often nothing more than a handful of digits, the more precise, the less meaningful. The anchor’s tone remains the same when talking about major wars or isolated outbursts of violence. The horror lays hidden beneath the rigidity of numbers. Figures give us knowledge, not meaning.

We wanted to put a picture on these digits. A shocking, gory picture, like the reality of war. We wanted to give context, like a scale on which we could visualize each conflict next to the others.

The idea is straightforward. More blood = more deaths during the corresponding conflict. What do you think—does the medium make the data more meaningful?

The graphic is also available in print.

[100 years of world cuisine via @moritz_stefaner]