Test your Rock-Paper-Scissors strategy against the machine 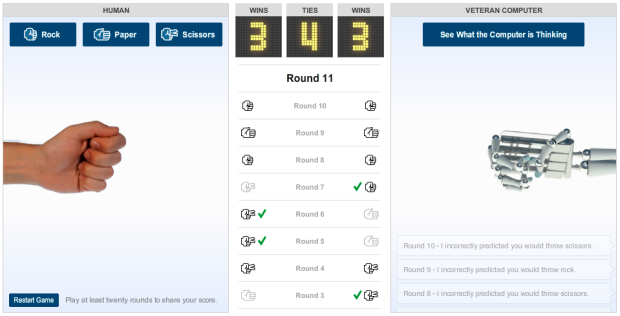 We learned the strategy to win Rock-Paper-Scissors every time, but does it really work? For the New York Times, Gabriel Dance and Tom Jackson give you your chance:

Computers mimic human reasoning by building on simple rules and statistical averages. Test your strategy against the computer in this rock-paper-scissors game illustrating basic artificial intelligence. Choose from two different modes: novice, where the computer learns to play from scratch, and veteran, where the computer pits over 200,000 rounds of previous experience against you.

Are you good enough to beat the basic artificial intelligence?