Journalism in the Age of Data 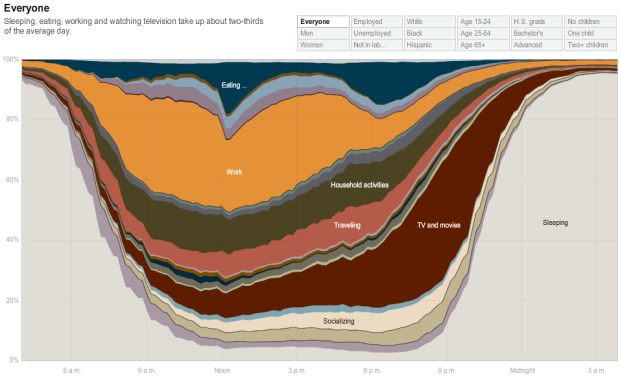 In the words of Terrell Owens, get your popcorn ready, because this video (below) is awesome. During his Knight Journalism fellowship at Stanford, Geoff McGhee interviewed visualization trendsetters on how they deal and what they do with data in Journalism in the Age of Data:

Journalists are coping with the rising information flood by borrowing data visualization techniques from computer scientists, researchers and artists. Some newsrooms are already beginning to retool their staffs and systems to prepare for a future in which data becomes a medium. But how do we communicate with data, how can traditional narratives be fused with sophisticated, interactive information displays?

Martin Wattenberg and Fernanda Viègas kick things off with some of the work they did with IBM. Then it’s Ben Fry from Fathom, then Jeffrey Heer from Stanford, and then Steve Duenes, Matt Ericson, and Amanda Cox of The New York Times. Later on, there’s some Nicholas Felton on his Feltron Report and Eric Rodenbeck of Stamen, with several others.

Basically, all the repeat offenders here on FlowingData are in this video talking about what they do best. They cover the importance of editing and curation, some of the tools they use, how their graphics tie in to storytelling, and the challenges that lie ahead. There’s also a lot of hat tipping to statistics.

I also really like how one person will talk about his or her project, and then the video cuts to another expert saying what they think of said project. There’s a lot of interviews, but it’s edited to flow really well.

The video is on the long-ish side at a little over 50 minutes, but it’s totally worth it, so if you can’t watch it now, I highly recommend you bookmark for later. You can watch the embedded video in full below, or you can watch the annotated version for bios, links, and references. Watch it. So good.