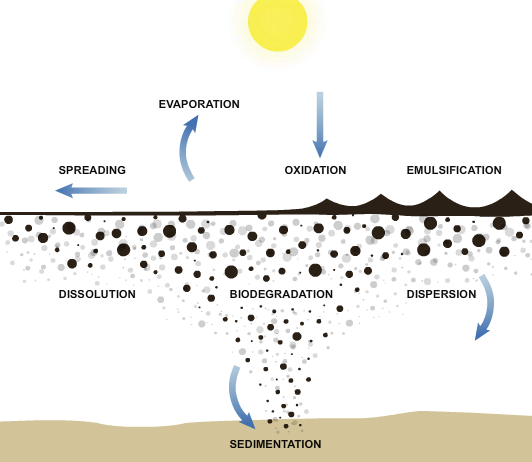 What exactly is going on with all the oil spewing into the Gulf, biologically speaking? MSNBC explains in a series of graphics:

The Deepwater Horizon oil spill has released millions of gallons of crude oil into the Gulf of Mexico, making it the most devastating oil spill in U.S. history. It is clear that the spilled oil will have a large impact on the Gulf coast for years to come, but what happens to the oil in the first hours, days and weeks as it interacts with the surrounding elements?

There are many physical and chemical processes, collectively known as weathering, that change the oil’s properties and behavior after it is spilled into the ocean.

It begins with the oil particles spreading, and over months and years, particles eventually sink to the ocean floor and micro-organisms feed on hydrocarbons in the spilled oil. After that, I like to think everyone refuses to buy anything BP-related and the company goes bye-bye.