Data Life of the Future

It’s fun to imagine the future. Every few months, someone takes a stab with a concept video or a proof of concept prototype, providing a glimpse into human-computer interaction and data visualization in a decade or two. What will it really look like? It’s anyone’s guess. But if people’s imaginations are any indication, the future will be filled of data displays and 3-dimensional holographic objects projected into physical space.

If there’s anything uniform across all the ideas, it’s ubiquity. In the future, computers won’t feel like computers, and data will not just flow alongside the physical world. Instead, data will intertwine with your day-to-day like threads in a fabric.

Most recently, Frog Design, came up with some of their own concepts (which accompanied a fine series of articles on Life in 2020 in Forbes).

In this one a girl sees a jacket that she likes on someone else. She is able to look it up instantly. 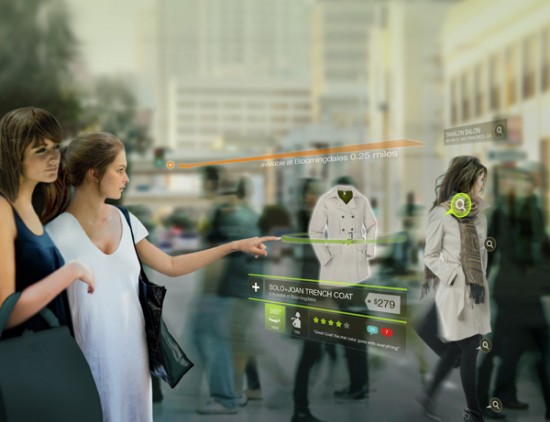 Next, a man grabs a meal at his favorite fast food burger joint. A display pops up that tells him that he is fat and needs to exercise more. He feels sad. He later enjoys his burger and fries, accompanied by his American-sized coke. 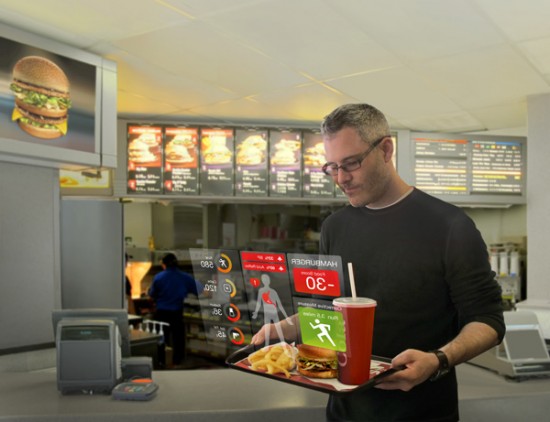 Finally, in the the third, a married couple, Andrew Kendel and Jenny Daniels, sit down for a nice cup of coffee. They both feel smug because they have way more friends then Mandy Monroe and Maggie Jones behind them. April, however, who appears to have the same profile as Jenny doesn’t seem to be all that excited to be hanging out with the lesser Mandy. 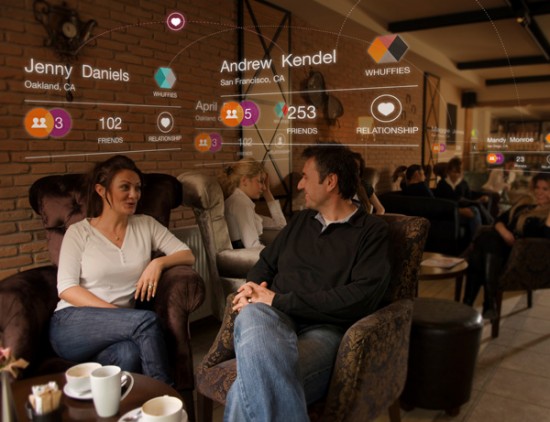 Okay, so your first thought is probably that the world would be a very cluttered space with floating displays on top of everyone’s head. The premise here though is that you’d wear something to augment your vision or simply see the data on your mobile. The main points are more about linked data, virtually unlimited resources, and data embedded in the everyday. People aren’t going to actually walk around with projectors in their bags.

We’ve seen this before.

Microsoft has a boatload of concept videos for what they’ve envisioned for 2019. Here’s the main one. The rest are variations of this, but for specific application areas like construction or medicine.

Freeband Communication envisions an embedded life too – with a dash of drama.

Designer Timo Arnall has something similar in mind for maps in his concept video, Map/Territory. Somehow the map displays itself to scale, below your feet.

How about taking it all the way to the extreme, where, uh, no man has gone before?

Create an entire world virtually with holograms you can manipulate, but make it real in your mind – and someone else’s. 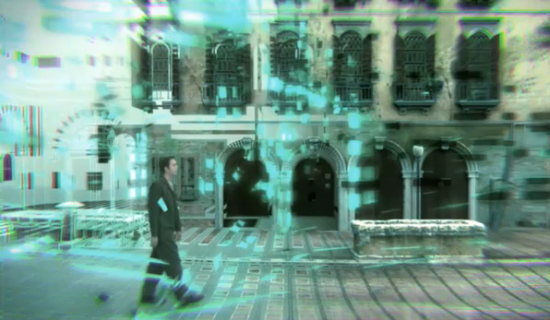 Of course we can’t talk future data interactions without making a reference to the Minority Report scene. John Anderson sifts through images and facts as if he were conducting an orchestra.

We saw something similar in Iron Man 2, but kicked up a notch. Tony Stark creates a completely new element. Fancy that. There were 3-dimensional projections flying every which way and things imploding and exploding with a clap of a hand.

Let’s not forget that just about every surface of his house and lab was interactive and functioned as a single unit. 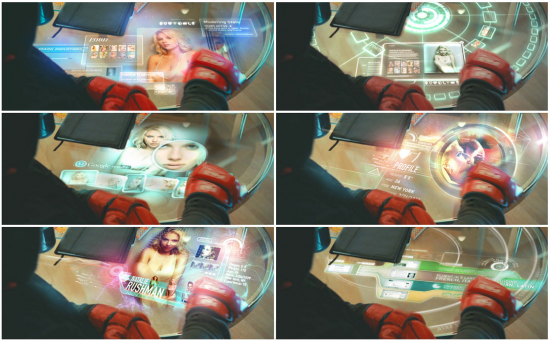 Crazy stuff. Are these ideas really that far fetched though? Crazy as they may sound, sometimes it’s funny how life likes to mimic the imagination. We already have visual related-image search, social networks are finding their way into the real world, and data collection has gotten super easy with advancing mobile technology. Skinput takes the interface out of the device, and uses your body as the input surface. We’ve even got Minority Report style interfaces popping up.

So how much of these concepts will actually come to fruition in the next decade? Like I said, it’s anyone’s guess. Whatever it is, it’s going to be fun.

What do you see in the year 2020? Let your imagination run wild.