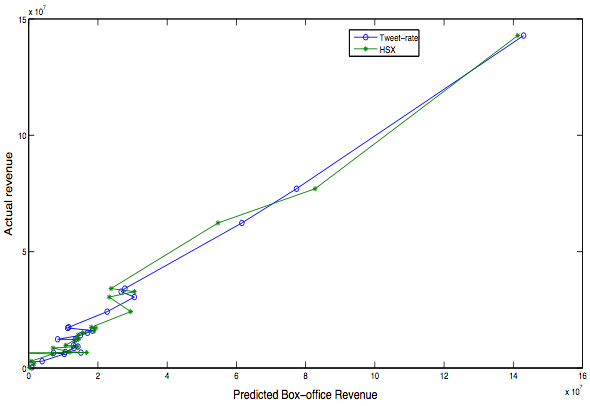 A recent study [pdf] by Sitaram Asur and Bernardo A. Huberman at HP Labs found that it’s possible to use Twitter chatter to predict first-weekend box office revenues simply based on volume of tweets. The predictions were even more accurate when they introduced sentiment analysis (i.e. classified tweets as positive or negative).

The above chart shows predicted revenue on the first weekend versus actual. The blue line is the tweet predictor, and the green line is predictions from Hollywood Stock Exchange, a site where people can put down fake money in predicting box office revenues.

What you see are predictions that are more or less within in couple hundred thousand of the actual openings.

Asur and Huberman note that their tweet-based model outperformed HSX, which is interesting because HSX is switching to real money soon. That’s like having a slight edge over the dealer in black jack.

This also has implications in predicting other stuff that involves the opinion of the masses, for example, who is going to win an election or how well a product will sell. With that type of information, candidates could design their campaign strategies, and manufacturers could prevent over-production.

Music to Twitter’s ears, I am sure.

It’s no wonder companies are so hungry to find out what people are talking about on Twitter. Put together a high-quality analysis and visualization package or application and you’ll be rolling in it.

[The Technium via kottke]