Review: RoamBi, Seeing Your Data on the iPhone 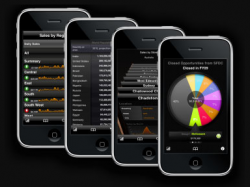 This is a guest review by Peter Robinet of Bubble Foundry, a web design company that specializes in building websites for Web startups.

RoamBi is a free data visualization application for the iPhone by MeLLmo. You download datasets to the app and it creates visualizations so you can drill down into the data. The app is pitched as a mobile business tool for viewing sales reports and the like, but the sample visualizations included with the app suggest another possibility: RoamBi could easily be a killer app for statistics-minded sports fans, such as sabermetrics devotees!

RoamBi gives you several ways to visualize a dataset and they all look gorgeous:

There is the Cardex, which is a Rolodex view of your dataset where you actually flip through cards, with each card being a row in your dataset. I imagine is a useful way to view business reports but it is hardly a sophisticated visualization.

The PieView is a pie chart with slices that can be selected to view more information about the segment.

The SuperList is essentially a spreadsheet viewer: the data is displayed in cells and you have the ability to filter rows and display some or all of the columns.

Finally, there is the CataList. This is perhaps the most complex, and most visual, of RoamBi’s options. Like the name suggests, it shows the dataset in lists and grouped by category. For instance, one sample dataset has information for the top 50 grossing films. The categories include Total Revenue, Average Weekly Revenue, Weekend Gross Revenue, and Weekend Gross Revenue Per Theater. Within each category you are presented with the list of movies sorted from highest to lowest with revenue over time line graphs for each movie.

What RoamBi Is Not

Perhaps this doesn’t need saying, but the RoamBi iPhone app is not a data manipulation tool. Any data set creation must be done elsewhere and then uploaded to a RoamBi server for access from the iPhone app. Also, there is no complex querying mechanism, so your datasets must be relatively small or easily aggregated. This being said, the app does a very good job of efficiently using the iPhone’s screen real estate, so you will be surprised at the amount of data you can navigate using the app.

RoamBi servers are a key component in using the iPhone app, as they are the only way to create your own visualizations to download to the iPhone app. While RoamBi sells an enterprise server, I imagine most users will use the free RoamBi.com service (called RoamBi Connect within the iPhone app). To create a visualization on RoamBi.com you create a free account and launch the Flash-based creation tool. Once you select a dataset, whether via uploading an Excel or CSV file or via importing a Salesforce.com report, you tell RoamBi the columns and categories of your data. It selects basic defaults and as you edit the parameters the visualization is updated in an interactive simulation of the iPhone app. As a side note, it is strange you cannot share the simulation, as this would be an easy way to share your visualizations across the web to people who do not have iPhones and it shouldn’t require any additional work on MeLLmo’s part.

Unfortunately, I found the RoamBi.com visualization process somewhat obtuse and often was unable to assemble and group my data into the visualization I wanted. For instance, I was unable to duplicate RoamBi’s sample movie sales visualization, despite importing the same raw dataset into my own CataList visualization. However, I believe someone more experienced with Excel or similar tools will have more success.

I see the RoamBi iPhone app as a tool to view datasets, rather than examine data visualizations. Perhaps this is peculiar distinction, but I mean that you are never far from the original dataset and cannot do sophisticated things to the data either mathematically or visually. However, for simpler data visualizations RoamBi is a well-executed and free product that let’s you easily drill down into your data from your iPhone. If you have a dataset you’re looking to share on the go, perhaps at a trade show or conference, and you have an iPhone, you should give RoamBi a try.

Have you tried RoamBi on your iPhone? Tell us what you think in the comments below.