Data Flow: Visualizing Information in Graphic Design isn’t an Edward Tufte book. It’s not an instruction manual nor is it a guide to analytical and statistical graphics. Rather, Data Flow is a showcase of visualization and infographics with a hard focus on aesthetics and form.

I was naturally drawn to Data Flow, because well, this blog and the book practically share the same name. As I flipped through the pages, I realized that I’ve written about a lot of the pieces on FlowingData, and even one of the works that I collaborated on a while back is in the book. It was nice to see them in print though. A lot of visualizations are simply better on paper than they are on a monitor. I don’t think I have to explain why. 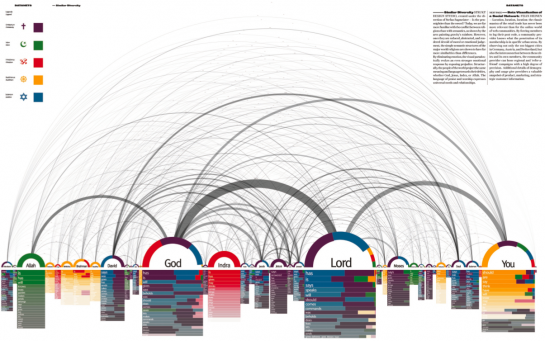 Data Flow has a nice tactile feel with 250 thick-paper pages and high quality prints. The colors are bright, the graphics are big, and the text is limited – all the makings of an excellent coffee table book.

The layout is like that of an art book. Data Flow is split into six sections based on form – datasphere, datanets, datascape, datalogy, datanoid, and datablocks or in other words, circles, networks, spatial, physical, and rectangles, respectively. I personally would have preferred a split by data type. I realize it’s graphic design, but the layout is like a non-emphasis on the data, so some of the purpose is lost.

That said, Data Flow is chock full of beautiful data visualization examples. A lot of works from many well-known designers are included like Nicholas Felton’s Feltron Report, Stamen Design’s Cabspotting, and Chris Harrison’s Biblical Social Network as well as plenty of the lesser known, but equally impressive pieces. I was a little surprised not to see anything from Jonathan Harris, Golan Levin, or Aaron Koblin, but maybe those are more interaction design than graphic design?

Speaking of layout, I agree with a lot of the Amazon reviews. Layout is inconsistent. It’s like a mashup of images without any clear defined margins, which is not a huge deal but it does go against my personal preference. For example, there are lot of full-page pieces, but some only take up 2/3 of a page with a lot of white space around; or there are two equal-sized images with one centered on the page while the other is aligned right.

Data Flow isn’t perfect; but I still like it, simply for the pretty pictures and as a source of inspiration. Don’t buy this book if you’re looking for a how-to in data visualization. Buy this book if you’re interested in aesthetics and crave some infographic inspiration from time to time. It basically all comes down to this one question. Do you like information aesthetics? If yes, you’ll like Data Flow.

Get a Free Copy of Data Flow

Ah, so you made it to the end of this review. You must be interested. Guess what. I have two copies of Data Flow to give away. Leave a comment below, and I’ll pick two people at random tomorrow (Tuesday) at 8pm EST. This is restricted to those with a US mailing address.

UPDATE: This one’s all done and over. The lucky two should have received a notification email now. Thanks to Gestalten for providing the giveaways.