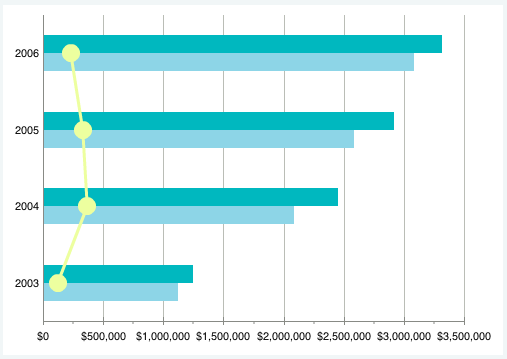 Josh Tynjala of the Yahoo! Flash Platform team contributes the new YUI Charts Control, a hybrid JavaScript/Flash component that supports bar, line, and pie charts. The Charts Control draws data from the same DataSource Utility that underpins the YUI DataTable Control, making it possible to do combined chart/table visualizations. The Charts Control accepts CSS style information, allowing you to skin the chart itself without touching the underlying .swf file. But if you do want to dig into the Flash side of this project, you can get full access to those assets on the ASTRA site.

What does this mean? It means that we’re probably going to see a lot more hack-ish looking charts online (example above); but we might also see some nice-looking charts since it seems like they’re potentially customizable. In any case, it’s good to see this. There’s some cruddy Flash-based chart libraries that people are actually charging money for. This free and open library should have some positive effects.